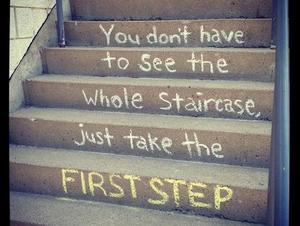 There are times I feel so unmotivated, it can be an effort to accomplish anything on my ‘to do’ list. When this happens, I sometimes find it best to step back and re access. Maybe color code my duties according to urgency or priority.

A woman I used to work with did that and I thought it was a great idea,
She would assign jobs (she needed to do) a certain color, depending on how relevant they were. Red, for instance, might be assigned to all things she had to do either that day or the next. The color green might be used to identify things which still had to be done, but not as quickly. Perhaps blue might indicate jobs which needed to be done sometime in the future. quickly. The color used is subjective of course, but I found this plan to be both workable and practical

Here’s my point: Sometimes a job may seem overwhelming – almost unattainable. When I break it down into smaller tasks, it ‘don’t seem so difficult.’ (bad language, to make a point).

I often compare this idea to living in a home with a leaky roof. It is raining, and the rain is coming through the roof. There is a large bowl on the floor under the hole in roof. As the bowl accumulates the rainwater fills the bowl. At the end of the day the bowl is completely full.

Sometimes It like this with a schedule. At first glance the number of duties or jobs to do seem almost overwhelming, but by breaking them down into smaller portions or sections, we get it done.