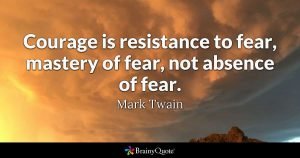 One of my favorite definitions of courage is this quote by Mark Twain: ‘Courage is not the absence of fear; it is acting in spite of it. ‘ We al have our fears. Each of us, at least in my experience, has at least one or two things which we want to do, but are afraid of trying.

F.E.A.R. is an acronym for False Evidence Appearing Real, IT is actually an illusion.

I am reminded of a story I once heard, about the actress, Katharine Hepburn Although I don’t know whether it is true, I am going to share it anyway. Kathrine Hepburn is supposed to have been walking down a country , summer day, when she saw a horse drawn cart coming towards her. As the cart drew closer, she noticed the driver was an incredibly handsome man. When the cart reached Katherine, the driver stopped, holding out his hand, wordlessly inviting her to join him. She hesitated for a moment, then turned and walked off as quickly as possible. She later said she often wondered how her life might have changed had she had the courage to get in the carriage.

We are frequently given opportunities to choose to action or avoid situations which we are attracted to, but afraid of.

I recently experienced a situation in which I needed to contact someone about some plans for a project we were working on. I was actually afraid to approach this person who, in my mind, would be upset if I did. The term ‘paralyzed by fear’ kind of sums this up here. On the one hand we really needed to get moving with this project, but on the other hand, I didn’t want to appear pushy. I finally decided to do something. Taking a leap of faith by asking my friend if they wanted to meet. They agreed right away. We moved on with our project and I felt great.

Sometimes taking just the simplest step is all that is needed. Especially when that step is just moving outside of your head.

Or as I like to say:’ Leap and the Net will Appear’. (John Burroughs) 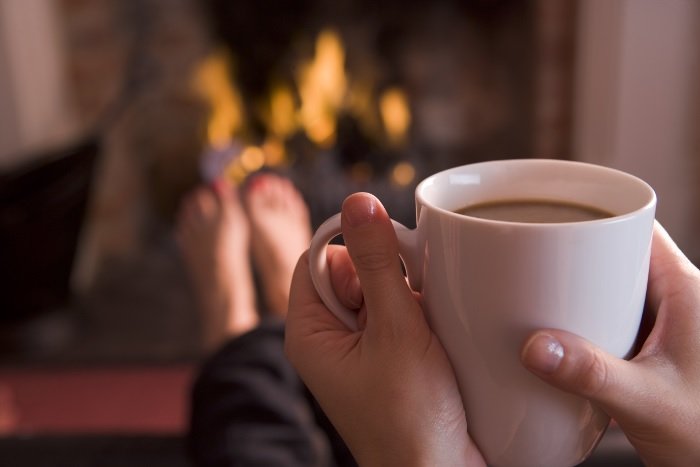