(Originally Posted on October 5, 2013)
Yesterday morning I learned something about communication.
Sitting at my computer, I heard my cat Spirit making sounds as she at on the windowsill looking out. Because she was behind the blinds,(I was unable to see what or whom she was talking to). I decided to investigate.. Walking up to the window and opening the blinds, I was surprised to see a neighbor’s white cat walking on the edge of the brick wall right in front of my window. Because my cat is also white, the image was breathtaking. The thing I noticed about the interaction between the two felines is that they were getting along. Each was doing their thing; Spirit sitting on the sill, surveying the scenery; the other cat, busy exploring the brick wall (and surrounding area) he was walking on.

Upon discovering what had claimed Spirit’s attention, I returned to my desk to continue typing. As I sat there, my attention returned to Spirit and the other cat. Although I was unable to see either of them, I knew they were communicating in their own way. Spirit, although curious about the ventures of the other cat, (I will call him ‘David’ here) was fine with him walking around. David was also fine, as his casual, yet intent, gait and manner indicated. And I realized-as I watched the pair of them- that I was able to tune into and access the situation simply by observing without any ideas about what was going on.

This is just another example of how one can listen with all their senses. 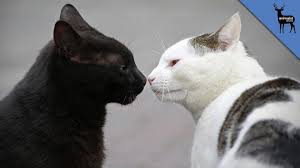