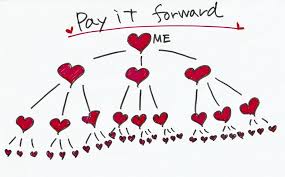 I encountered a woman yesterday morning as I was walking to catch a bus  to take me to a shop  where I give psychic readings once a week. She explained that although she had food & mother was  sending her a ticket back home to Illinois,  she needed $8 for a hotel room. Something about her demeanor made me reach inside my wallet. ‘ I only have $5, but can give that to you” I said. “. She agreed.

Reaching in my wallet for the money, I discovered an extra $10, which I handed to her. “Thank you”, she said as she walked off. “ I am going to pay this forward”. I felt good. Happy I could help.

At the end of the day, I was paid for a reading I had given and was also given a tip from the person I had read for. The amount? $10 –the exact amount I had given the woman earlier that day. Did I give the woman anything with the idea of getting something? No, I just wanted to help, but the fact that the amount I was tipped was exactly the same amount I gave the woman spoke volumes to me.